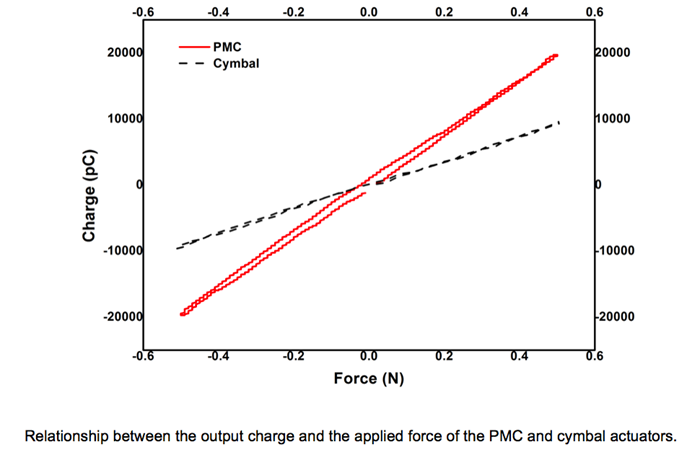 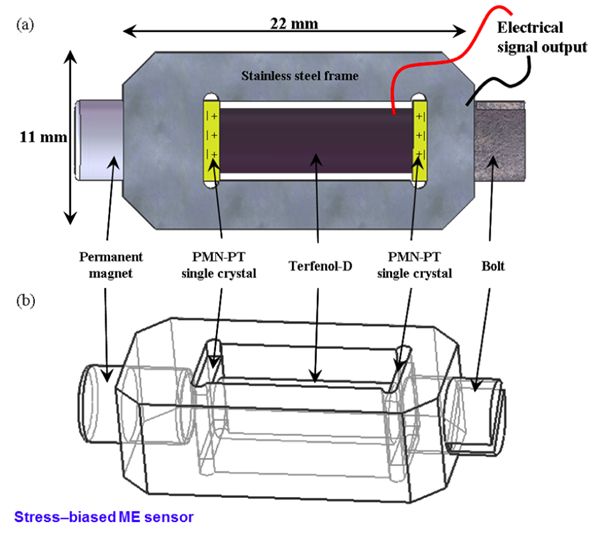 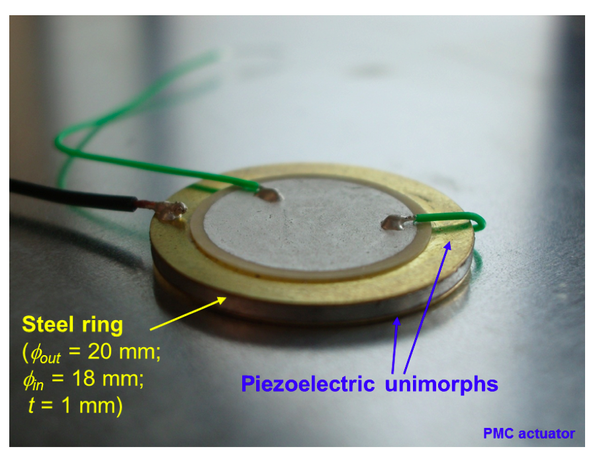 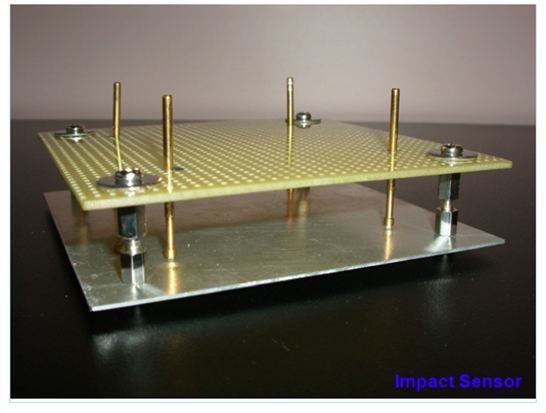 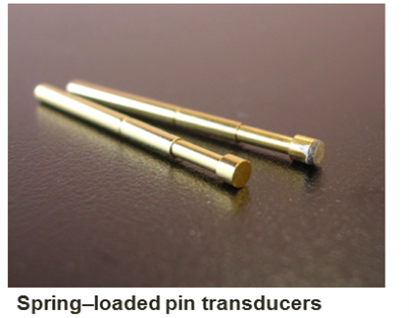 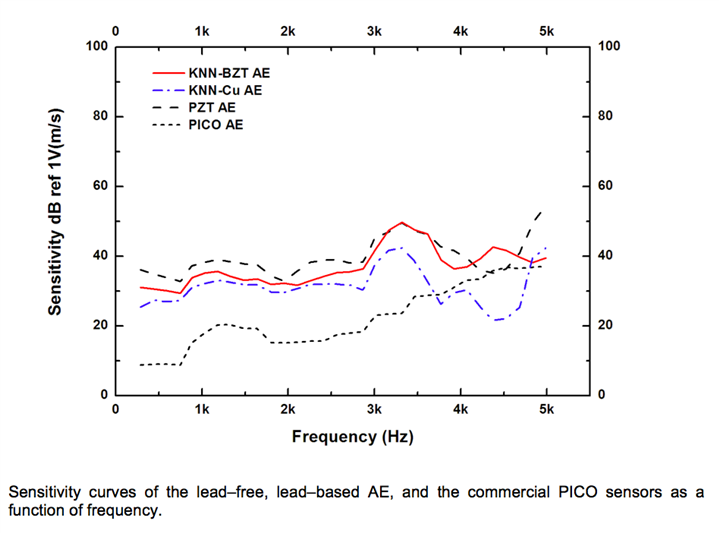 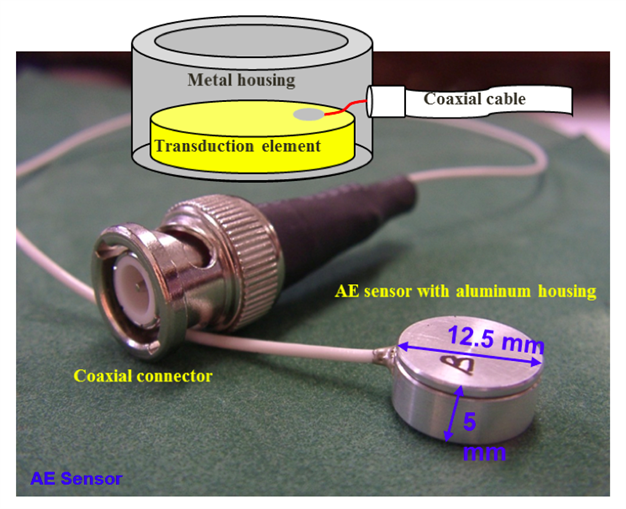 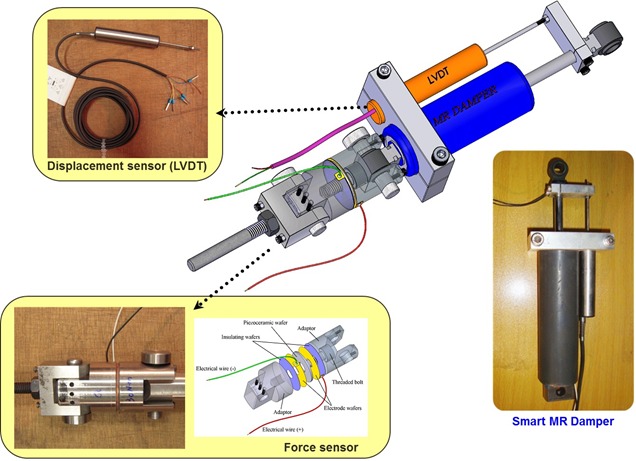 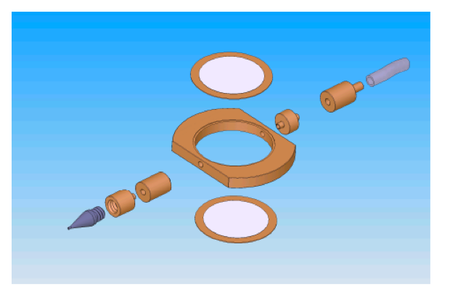 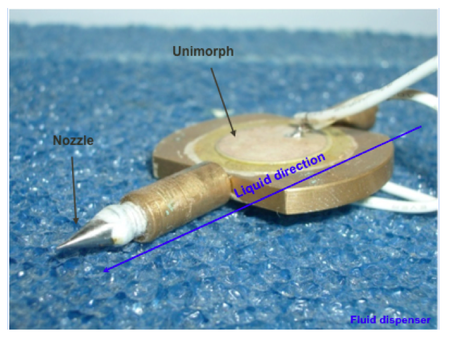 In this work, the lead-free AE sensors were calibrated using a laser source and compared to a PZT sensor and a commercial sensor. To evaluate the sensors for potential application, they have been used in the detection of AE in an impact test. It was found that the lead-free sensors show comparable sensitivity with the lead-based sensor in both the broadband laser calibration and low frequency impact test. Both the soft- and hard-type KNN-based lead-free ceramics with high g coefficients have the potential to be used in commercial AE systems.

A stress-biased ME sensor fabricated with the PMN-PT crystal and Terfenol-D alloy was developed for magnetic field detection application. The sensor consisted of a Terfenol-D rod sandwiched between two thin PMN-PT single crystal plates, which were assembled into a stiff stainless steel frame. The Terfenol-D rod and PMN-PT single crystal plates were mechanically attached in series without using epoxy. A preloading stress was applied and can be adjusted using a bolt at the end of the frame. With this design, the Terfenol-D rod could be excited into a longitudinal motion under a magnetic ﬁeld applied along the longitudinal-axis of the sensor. As a consequence, the single crystal plates, prestressed with the Terfenol-D rod, were forced to vibrate along the same direction. A built-in permanent magnet installed in a metal frame was used to provide a d.c. magnetic bias on the PMN-PT / Terfenol-D ME sensor. With a built-in permanent magnet, the compact device can be used to detect magnetic field as a standalone sensor without requiring external power input.

For smart actuators, metal-ceramic actuators are one of the well-known designs. This kind of actuator combines both the flexible characteristics of the metal and the piezoelectric characteristics of the ceramics so as to enhance the mechanical performance of the whole device. From the idea of traditional cymbal actuator, a novel PMC actuator was designed as a high displacement actuator with relatively low fabrication cost, which is a flexural or bending type actuator. The structure of this PMC actuator is very simple, which consists of a metal ring sandwiched between two identical piezoelectric unimorphs.

​The first vibration mode of a PMC actuator in a FEM analysis.

Fluid dispensing with a driving condition of 12 V at 1 Hz.

A magnetorheological (MR) damper with embedded force and displacement sensors is devised to facilitate closed-loop structural vibration control. A piezoelectric force sensor and a linear variable differential transformer (LVDT) have been integrated with a conventional MR damping device. The piezoelectric sensor is used to sense the damping force produced by the damper, while the LVDT is employed to measure the displacement of the vibrating structure at the damper location and the movement of the damper piston. The sensing-while-damping function of the damper hence offers its potential for real-time feedback structural vibration control.